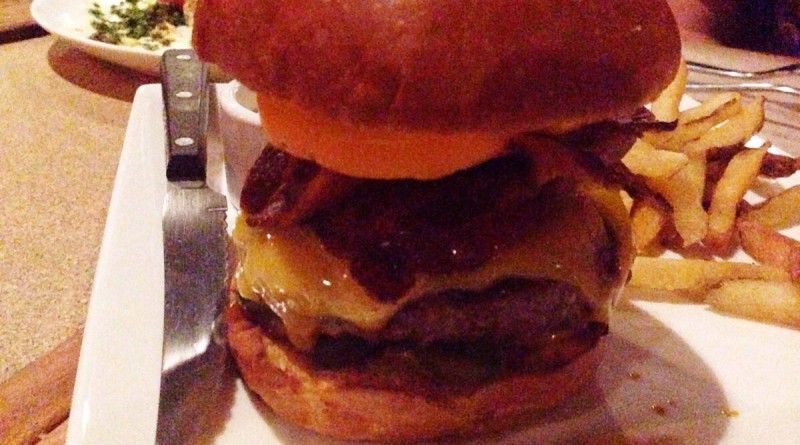 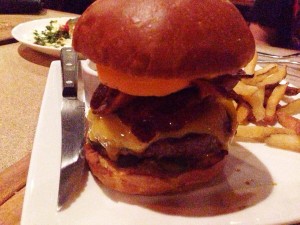 If you’ve been following my recent reviews on FB, you probably guessed, these days I am on a mission to get to all the new Richmond restaurants that have sprung up in the last few weeks. So when my good friends M&M (real cool people!) suggested we meet up at Station 2, I jumped at the opportunity. Station 2 supposedly offers gourmet burgers & craft beers. Given my new found interest in craft beers (Thanks to M&M again), it sounded like a winning combination.

Beers & Appetizer: On a Tuesday night, we got to Station 2 (2016 East Main Street) at 7:30 pm. The restaurant was about 30% full. We were seated immediately. Our server, Avian promptly got us waters upon our request. The beer list looked pretty decent. I ordered theMaroon Effect Ale ($4.00), Bull & Bones Brewhaus, Blacksburg, VA which for that price was a great value. M ordered Gaelic Ale ($5.00), Highland Brewing Company, Asheville, NC which was pretty average – I wouldn’t recommend it unless you are a BMC (Bud/Miller/Coors) lover. Just for the record, she is not. The other M got the Evil 8 Belgian style Dubbel Ale ($5.50), Blue Mountain Brewery which is a great beer. It took Avian a while to get our beers (all draft) which I guess was a harbinger of things to come. M wisely suggested that we get an appetizer based on the time it took her to get our beers. After much deliberation we settled onFried beans served with wasabi aioli dipping sauce ($6). The appetizer arrived pretty quickly and was average. The wasabi aioli sauce, as we would later learn was the highlight of the evening. Little did we know then, This is as good as it gets. Sigh!

Burgers: I will remind you once again this place allegedly serves char-grilled gourmet burgers. Almost all burgers are $9. Half pound Angus ground beef hand formed served on locally baked bread (Lucille’s Bakery). Sounds delicious! After a prolonged discussion we settled on Hawaiian Sun – Teriyaki glazed burger with grilled pineapple, cheddar, teriyaki grilled onions, lettuce, tomato and wasabi aioli, Spicy new mexico – Pepper jack melted over a whole roasted chile, applewood smoked bacon, lettuce, tomato, red onion and garlic aioli and Chow bella – roasted sweet peppers, applewood smoked bacon, mozzarella, arugula, onion and garlic aioli. Spicy new mexican was ordered with turkey instead of beef. M asked if they could cook the burger rare and Avian made a face and said “Not really”. Both M and I settled on the medium rare option after that conversation. All the burgers come with a side so we decided to go with onion straws, classic fries and sweet potato tater tots. We waited about 32 minutes for our burgers to arrive. During this time, Avian did not check on us or apologize or show up at the table. The bun was cold, the fries were cold and not fresh, the onion straws were swimming (maybe drowning) in oil. Sweet potato tater tots were warm and cooked fresh but very average. Let the fun begin… Both beef burgers were cooked Medium well not Medium rare. M got the garden black bean burger instead of her turkey burger. Avian did not bother to check on us for the next 7 minutes. We had to flag her down and point out that M got the garden burger instead of the turkey burger. She very non chalantly said “Oh I thought you said veggie”. When taking the order, Avian had commented “Oh how would you like that cooked, Never mind, it’s turkey. I am just used to asking that question”. M was a sport though and decided to brave out the garden burger which was gritty since it had a layer of uncooked rice in it. She could only muster enough courage to get thru half of it. Avian came back after 8 minutes and told M that they would comp 50% of her burger. Seriously? Back to our overcooked burgers… Beef had some flavor but nothing memorable. Bacon was average. None of the ingredients really stood out. Couldn’t taste the garlic aioli. I can name at least ten places in Richmond that serve a better burger and don’t even bill it as a gourmet burger. We were not asked if we wanted another beer. Water was not refilled. Got the eck when we asked but took her about 9 minutes pick up the check & credit card. She cleared the dishes about 6 minutes after that and also proceeded to pick up the tab, look at her tip and key it into the system. Faux pas! Let’s just say if Avian was a model, she would be dressed in baggy jeans, folded up to her shin, wearing white socks with crocs – Yeah you get the idea!

Overall: It’s very rare that I will decide not to go back to a spot to give it a second chance. In this case I am afraid to say – I would rather have a burger at Five Guys than go back to this gourmet burger joint. Decent beer list though, reasonably priced. Milkshakes, floats and couple of desserts did look interesting but we abstained. Can you blame us? Sad part is this place will survive because  of the location and beer. Time will tell…

January 13, 2016 RichmondFoodie.com Staff Comments Off on Castanea
All Downtown Restaurants 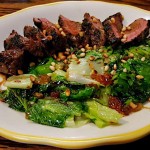 Enter an address or zip code and click the find locations button.